With a largely new roster, a second-year head coach, first-year assistant coach and new team captain, all the right pieces came together to give the Moraine Valley Community College women’s tennis team two championships and trip to nationals this season.

It has been quite a turnaround for the Cyclones, who finished fourth in the NJCAA Region IV and third place in the Illinois Skyway Collegiate Conference last year. The Cyclones are now champions of both. Aside from a first match loss, where two players were injured and unable to finish competing that day, the team was undefeated. They went 6-1 overall and 4-0 in conference, largely dominating opponents, including four shutouts.

From the onset, the players worked hard and wanted to qualify for the national tournament in Texas. With each match, they grew more confident and determined. By season’s end, the Cyclones were conference and region champions and headed to nationals in May. The last time the program earned a conference championship and trip to nationals was in 2015, and the last region crown was won in 2014. 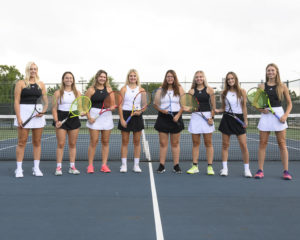 “Of all the teams I’ve coached, I’ve never seen a group more hungry. They’re the most competitive, driven team, hands down,” said Head Coach Matt Marusarz, who was named Region IV and Skyway Coach of the Year.

Sophomore Hannah Markiewicz (Mother McAuley) avenged her regional loss in 2021 and this season’s match loss to Sauk Valley by becoming region champion at No. 3 singles. She also was the conference champ. “Respect to Hannah for bouncing back after that loss last year. She played hard against Sauk Valley,” Marusarz said.

Schultz emerged as a team leader and was the first one on and last one off the court, Marusarz said. Cameron picked up a racquet for the first time this fall and won a championship. She also competes for the women’s basketball team and has played on the women’s soccer team. These two are on the basketball team this winter.

Although the entire roster shined, Tomczak was one of the toughest mental players Marusarz has coached. “She’s always ready to go. At regionals, she ran with all the outside noise and played out of her mind,” he said.

The Cyclones have a few months to prepare for the national tournament and heal any injuries, but players are already asking for workouts.

“We had a lot of great matches this season, and I’m proud of all the players,” Marusarz said. “They worked hard, and we had such a great turnaround. Now, we’re working for nationals.”